The mission of American Rivers is to protect wild rivers, restore damaged rivers and conserve clean water for people and nature.

We combine national advocacy with field work in key river basins to deliver the greatest impact. We are practical problem-solvers with positions informed by science. We build partnerships and work closely with local river advocates, business and agriculture interests, recreation groups and others to forge win-win solutions. And with our expertise, outreach, and additional grants, we deliver the highest return on investment.

Our generous supporters make the protection and restoration of the nation’s rivers possible. See the graphic to the right for a snapshot of recent successes. 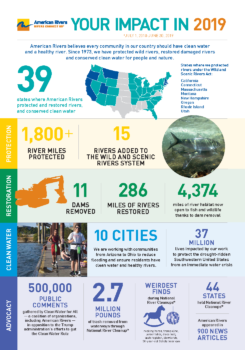 Together, we will achieve the following goals:

Water is life. Yet rivers and freshwater ecosystems are among the most imperiled on earth.

In 1973, the United States was losing its best rivers at an alarming rate. A group of river runners and conservationists met in Denver, Colorado to confront the fact that unnecessary dams were destroying many of the nation’s last wild, free-flowing rivers. These river advocates also were concerned that Congress had failed to grant federal protection to any rivers since the original Wild and Scenic Rivers Act passed in 1968.

We had to move fast or we would lose our best rivers. [The early 70’s] was the golden age of dam building and we needed to fight back.

Today, we are the nation’s voice for rivers. True to our roots, we continue to stand up for wild rivers. But that’s not all – over the years, we have built deep expertise and success on a wide range of issues from clean drinking water to dam removal to flood protection, and many more.

With more than 355,000 supporters, we make a difference every day for clean water, rivers and communities nationwide.

Rivers connect us – to our past, to our future, and each other. Thank you for helping us build a future of healthy rivers.

Who we are and what we do.

WHAT WE STAND FOR

American Rivers has offices across the country and more than 355,000 members, supporters, and volunteers.

We are honored to list the impressive leaders who serve as our Board members and advisors.

Learn about open positions, including internships and fellowships at American Rivers

Learn how we implement diversity, equity and inclusion in our organizational culture

Please reach out with any questions! Become a River Guardian
River Guardians are leaders in funding our work to protect, conserve and restore our...

Become a Member
Your tax-deductible contributions supports our work to protect and restore the nation’s rivers, which... 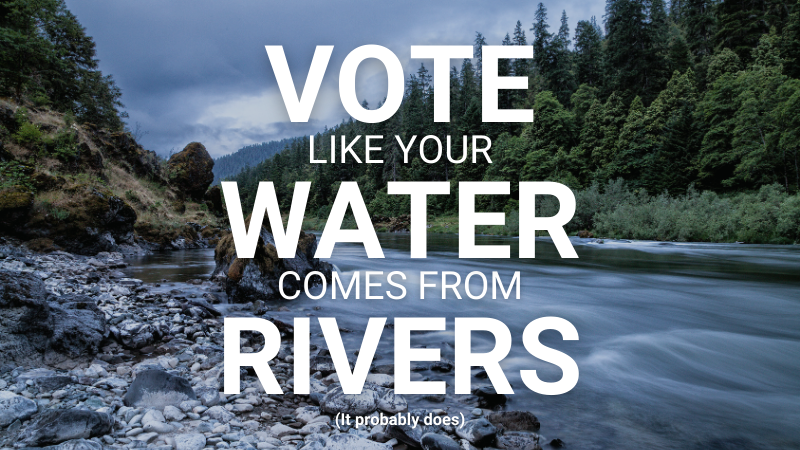